× Ask a Question re: Installation Of His Royal Highness The Duke Of Edinburgh As Chancellor Of The University Of Edinburgh
SKU: 11960 Categories: British Monarchy, World War II

Octavo, [iv], 30pp, [1]. Publisher’s full blue morocco, seal of the University of Edinburgh in gilt on front cover. Marbled endpapers, decorative gilt turn-ins, top edge gilt. Includes frontispiece portrait of Prince Philip, with two additional black and white photographic illustrations from the event. The installation ceremony took place on the 4th of November 1953, at McEwan Hall, Teviot Row. At this installation ceremony in 1953, Field-Marshal Viscount Alanbrooke was conferred an honorary degree of Doctor of Laws, for his leadership during World War II and on the home front. Includes a laid-in copy of an honorary degree document bestowed upon Prince Philip.

HRH Prince Philip (1921-2021) served as Chancellor of the University of Edinburgh for almost 60 years, retiring his role in 2010. In 2011, he oversaw the installation of his daughter Anne, HRH The Princess Royal, as his successor. 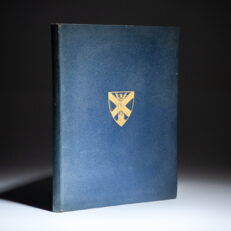 You're viewing: Installation Of His Royal Highness The Duke Of Edinburgh As Chancellor Of The University Of Edinburgh $325.00
Add to cart