The Political Progress Of Britain

Third edition of James T. Callender’s The Political Progress of Britain: or, An Impartial History of Abuses in the Government of the British Empire, published in 1795.

Octavo, 120pp. Original blue paper wrappers. Unopened top edge, uncut fore edge. Maine Historical Society Library stamp on cover and title page. Points of toning to title page, exceptionally clean text block. (Sabin 10066) (Evans 28379) A thorough rebuke of the British government by a noted political pamphleteer and journalist, James T. Callender. Towards the end of his life, Callender was disliked by both the Americans and the British for his well crafted political discourse as well as his willingness to print salacious gossip.

Full title: The Political Progress of Britain: or, An Impartial History of Abuses in the Government of the British Empire, in Europe, Asia, and America. From the Revolution, in 1688, to the Present Time: the Whole Tending to Prove the Ruinous Consequences of the Popular System of Taxation, War, and Conquest. 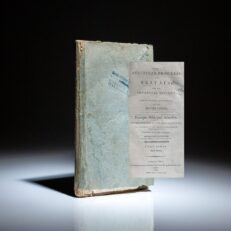 You're viewing: The Political Progress Of Britain $625.00
Add to cart