Octavo, [four volumes]. All bound in cloth, titles stamped in gilt on spines, publisher’s logo stamped on front cover of each volume. Volume I-III with no additional printings mentioned on copyright pages, Volume IV with a full number line. Light dust along top edge of text blocks, previous owner’s name in ink on front free endpaper of Volume III, else fine. In the publisher’s dust jackets, all four with retail prices on front flaps, light wear to spines, touch of shelf wear, all very good examples. Conceived in Liberty includes the following four volumes: Volume I: A New Land, A New People: The American Colonies in the Seventeenth Century; Volume II: “Salutary Neglect”: The American Colonies in the First Half of the 18th Century; Volume III: Advance to Revolution, 1760-1775; and Volume IV: The Revolutionary War, 1775-1784.

Murray Rothbard (1926-1995) was an American economist, who was a leading theoretician of anarcho-capitalism and a prominent figure in the American libertarian movement. He founded the Center for Libertarian Studies in 1976 and co-founded the Mises Institute in Alabama in 1982. 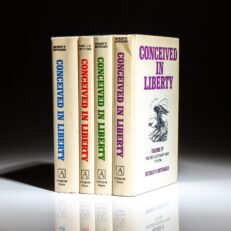