Setting the Course: The First Year

Ambassador John D.J. Moore (1910-1988) was the longest serving American ambassador to Ireland in history, serving from 1969-1975. Moore famously accompanied Vice President Richard Nixon to South America in 1958 and the Soviet Union in 1959. Both trips produced international headlines, with Nixon’s limousine being attacked in Caracas, Venezuela (May 13, 1958) and a conversation between Nixon and Nikita Khrushchev over the merits of capitalism being dubbed the Kitchen Debate (July 24, 1959). 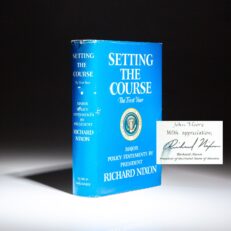 You're viewing: Setting the Course: The First Year $525.00
Add to cart