Controlling The Atom – The Beginning of Nuclear Regulation 1946-1962

Octavo, x, 530pp. Gray cloth, title in silver gilt on spine. First edition with full number line on copyright page. In publisher’s near fine dust jacket, touch of shelf wear. Inscribed by both authors to Ambassador Richard T. Kennedy – the head of nuclear nonproliferation efforts by the United States government in the Reagan administration. His high-level negotiations in the Soviet Union lead to the Intermediate-Range Nuclear Forces Treaty of 1987 and the Start I treaty in 1991. He led the US response to the 1986 Chernobyl disaster, helped to dismantle nuclear weapons in South Africa and began nuclear cooperation talks with China and Japan.

The inscription reads: “To Ambassador Richard T. Kennedy – Your sense of the importance of history helped initiate this project. we hope this first volume lives up to the expectations you had for the program. With much appreciation – George T. Mazuzan / J. Samuel Walker. October 30, 1994.”

Comments: The authors of this book, George T. Mazuzan and J. Samuel Walker were former employees of the Nuclear Regulatory Commission. J. Samuel Walker authored numerous books on nuclear proliferation and atomic energy, including: Prompt and Utter Destruction (1997), Three Mile Island: A Nuclear Crisis in Historical Perspective (2004) and The Road to Yucca Mountain (2009). 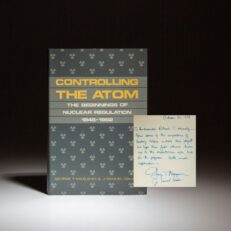