Octavo, xiv, [2], 559pp. Publisher’s tan cloth, title printed on spine. Stated “first edition” on copyright page, noting that it follows the limited edition, which was published the same year. Illustrated endpapers. Rubbing to the spine, with some loss to the black title label. Solid text block. In the publisher’s first state dust jacket, $5.00 on front flap, light sunning and chipping to the tips of the spine, wear along top edge, a very good example. Signed on the half-title: “For Stephen J. Antosy, with best wishes, Dwight D. Eisenhower.”

Stephen J. Antosy III was a World War II combat veteran, participating in the D-Day Invasion of Normandy and the Battle of the Bulge. After the war, he was a war correspondent for the Armed Forces Network, covering the Nuremberg Trials. He and his wife eventually settled in Pasadena, CA. 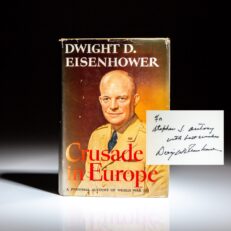