Comments: There were two presentation bindings of Crusade in Europe produced for distribution by author, Dwight D. Eisenhower. One presentation edition was bound in red morocco shortly after publication in 1948 and given to influential world leaders and supporters. It is believed that 26 copies of the red morocco binding were produced. The blue morocco presentation binding, this book being one of those, was produced by the Whitman Bennett Bindery. It is believed that only 11 copies were produced in blue morocco. 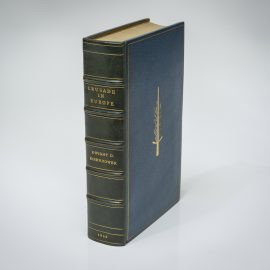