A New Era In World Affairs

Octavo, [iv], 58pp, [2]. Brown morocco, title in gilt on spine, presidential seal in gilt on front panel. Light wear at edges and along front seam. Top edge gilt. Housed in custom blue clamshell, title on spine on red morocco label. Limitation page states this is Number 21, from an unspecified, but limited edition publication. The book is inscribed by President Harry S. Truman on the front free end paper to Francis Biddle, the United States Attorney General during WWII and judge at the Nuremberg Trails. Inscription reads: “To Hon. Francis Biddle, with best wishes for a very Merry Christmas. Harry Truman. Dec 25, 1949.” An exceptionally rare publication and piece of presidential history.

Francis Biddle was the first member of the Roosevelt Administration that President Harry Truman sought to replace. According to Biddle, it was not easy for Truman to fire him face-to-face, but after Truman asked, he walked over to the President and said: “You see, it’s not so hard.” After his resignation, President Truman appointed Biddle to serve as a judge at the Military Tribunal at Nuremberg.Biddle was serving as the United States Attorney General when President Roosevelt died in 1945. He held numerous posts in the Roosevelt Administration, including the Director of the National Labor Relations Board, United States Solicitor General, and then-Attorney General. As Attorney General during World War II, he pursued the prosecution of German spies, enforcing the decision to hold a military tribunal instead of trying them in civilian court. In Ex parte Quirin (1942), the supreme court ruled the military tribunals were lawful. This decision has been used as the legal basis for Guantanamo Bay military commissions. 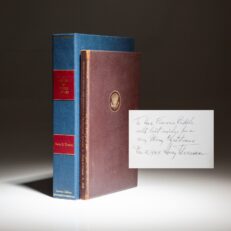