This limited edition is one of two limited editions of The White House Guide printed during the Kennedy administration. The limited edition of 100 copies is typically bound in green leather, the second edition of 75 copies is bound in red leather. They were produced by the Government Printing Office as gifts for intimates of President Kennedy and First Lady Jackie Kennedy. The recipient of this book, William Walton, was a confidant of President Kennedy, a journalist and abstract painter. He played a pivotal role in the redecoration of the White House and later in choosing the location of Kennedy’s final resting place in Arlington National Cemetery. A unique association copy seeing that Mr. Walton was responsible for many of the updates discussed in this book. 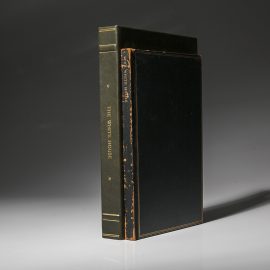