The contribution by Gov. Theodore Roosevelt is titled “The Santiago Campaign,” a short recap of his time in Cuba with the Rough Riders. (Wheelock, 18) 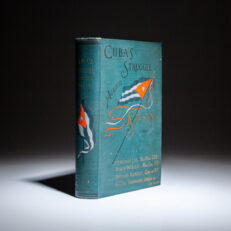 You're viewing: Cuba’s Struggle Against Spain $225.00
Add to cart