Education Of A Princess: A Memoir

× Ask a Question re: Education Of A Princess: A Memoir
SKU: 11935 Category: Holiday Gifts

Education of a Princess by Maria Pavlovna, Grand Duchess of Russia.

Grand Duchess Maria Pavlovna of Russia (1890-1958) was a granddaughter of Alexander II of Russia. She served as a nurse during WWI, until the fall of the Russian monarchy in 1917. In 1918, the Bolsheviks began asserting power, murdering members of her family. She escaped and eventually arrived in Bucharest, Romania. In the 1920s, she moved to the United States, meeting with publishers and eventually writing two autobiographies, titled Education of a Princess and A Princess in Exile. She eventually returned to Europe in 1949 and died in 1958. She was a first cousin of both Nicholas II, last Emperor of Russia, and Prince Philip, Duke of Edinburgh. 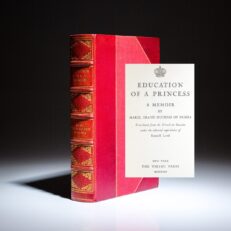