The novelization of King Kong by Delos W. Lovelace was published in December 1932, and in early 1933, a serialization titled “King Kong” by Walter F. Ripperger appeared in Mystery Magazine. Both were published in advance of the movie’s release in early 1933. Lovelace’s novelization did not appear again until 1965, when it was released in paperback form by Bantam Publishing. 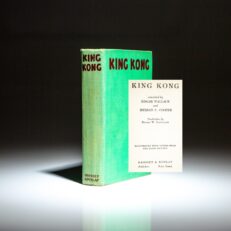