Faces Of The Senate

The Faces Of The Senate: A Pictorial Directory of United States Senators 1789 – 2005, featuring the new senator from Illinois, Barack Obama.

Octavo, [unpaginated]. Black cloth, title in gilt on spine. Illustrated endpapers. Clean text throughout. A complete photographic collection of senators from each state, including the new class, elected in 2004. A scarce text, as it was given primarily as a gift to Senate members and staff.

A collection of 1,838 individual images of United States Senators, leaving only 46 senators without an available photograph. 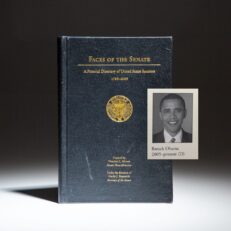