Forty-Five Years Under The Flag

Comments: Winfield Scott Schley was a rear admiral in the United States Navy, known as the controversial hero of the Battle of Santiago and rescuer of the Franklin Bay Expedition of Adolphus Greely. He wrote two books, The Rescue of Greely in 1885 and this book, which is a full autobiography of his military career. 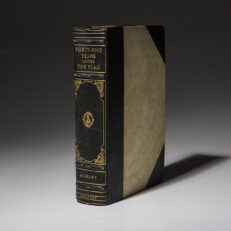 You're viewing: Forty-Five Years Under The Flag $550.00
Add to cart