Octavo, [4], 41pp. Bound pamphlet, title on front cover. A reproduction of the German surrender documents, produced by the National Archives. Signed by General Lyman Lemnitzer on the title page, with his rank listed below. General Lemnitzer was the senior Allied officer present when Col. General Heinrich von Vietinghoff-Scheel signed the surrender of German forces in Italy and southern Austria.

Comments: Army General Lyman L. Lemnitzer served as the Chairman of the Joint Chiefs of Staff (1960-1962), then Supreme Allied Commander Europe (1963-1969). He is remembered as a skilled diplomat and military planner. During World War II, as a major general, he was assigned to the staff of General Dwight D. Eisenhower, where he helped to plan the invasions of North Africa (Operation Torch) and Sicily. As the war neared its end, he was tasked with negotiating the surrender of Italy. General Lemnitzer passed away in 1988 at the age of 89. 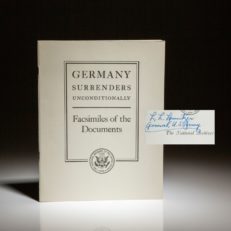 You're viewing: Germany Surrenders Unconditionally – Facsimiles Of The Documents $425.00
Add to cart