Go Quietly … or else

In 1973, Vice President Spiro Agnew was investigated for conspiracy, bribery and tax fraud relating to his time as Governor of Maryland. He pleaded no contest to one count of felony tax evasion and resigned the Vice Presidency. He was replaced by Gerald R. Ford, who went on to become President of the United States in 1974, with the resignation of President Richard Nixon. Agnew passed away in 1996. 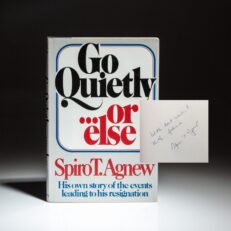