A postcard of the Graf Zeppelin (LZ-127), sent to Dr. Albert Hormor at the Harvard Club in Boston, Ma. The inscription reads: “Greetings from above the clouds – for the moment we are flying right through some low lying clouds. My best to your wife. Ackis R – ” Includes postmark stamp from the Zeppelin company, sent while in transit. The Graf Zeppelin (LZ 127) was the most successful airship in history, offering regular flights to North and South American. It made a world tour in 1929 and a trip to the Arctic in 1931. It was dismantled by order of Herman Goring in 1940 for use in the war effort.

Comments: The Graf Zeppelin made 590 flights and offered the first transatlantic commercial airship transport across the Atlantic ocean. It was in operation from 1928 until 1937, when it was permanently grounded after the Hindenburg Disaster 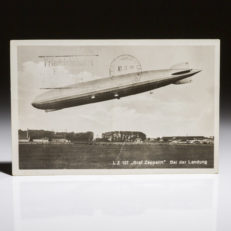