Octavo, 287pp. Red cloth, title in gilt on spine. Stated “first published 1956” on copyright page. Free of any marks or notations, faint rubbing to top edge of spine, a near fine example. Complete with 82 black and white illustrations. In the publisher’s first state dust jacket, price on front flap, short closed tear to top edge of rear panel, two closed tears to front panel, reinforced with tape, a very good example. Laid-in mailing envelope addressed to Sikorsky, with copies of letters between Heinkel and Sikorsky regarding this book, from the Sikorsky Archives in Stratford, CT. Signed on the front free endpaper: “With best wishes! Ernst Heinkel. August, 1956.”

This memoir by Ernst Heinkel was first published in German, titled Stürmisches Leben, and later published in America with the title Stormy Life: Memoirs of a Pioneer of the Air Age.

Igor Sikorsky (1889-1972) was a Russian-American aviation pioneer, best known for the development of the first viable helicopter. Early in his career in Russia, Sikorsky was successful in designing fixed-wing aircraft. Moving to the United States in 1919, he eventually founded the Sikorsky Aircraft Corporation. In the 1930s, the Sikorsky Corporation developed the first flying boats for Pan American Airways to allow for ocean-crossing flights. His most notable achievement came in 1939 with the development of the Vought-Sikorsky VS-300, the first viable helicopter. Provenance: From the estate of Susana and Nickolai Sikorsky, the son and daughter-in-law of Igor Sikorsky. Estate sale in West Hartford, CT, May 2021. 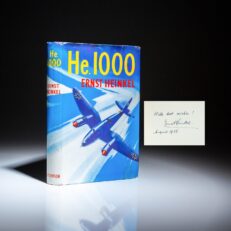