Presentation copy of Herbert Hoover: American Quaker to Mary B. Spargo, a well-known suffragist and wife of presidential advisor and historian, John Spargo.

Octavo, xx, 469pp. Red cloth, title stamped in gilt over black on spine. Top edge dyed red. Housed in the publisher’s slipcase, some shelf wear, solid seams, title and illustrations on side panels. From a limited edition of 1500, this being number 853. Signed by the author on the front free endpaper: “For Mary B. Spargo, with warm greetings from David Hinshaw.” Additional signature by former President Herbert Hoover: “And I add greetings to your husband and yourself who have been so loyal to me over the years. But don’t believe everything this book says! Herbert Hoover.” A scarce work signed by President Hoover, with a great association.

Mary B. Spargo (1880-1953) was a lifelong suffragist, who helped organize the March of Four Hundred Women in Vermont in support of the Nineteenth Amendment. She was also the wife of presidential advisor, historian and socialist activist, John Spargo. Following WWI, the Spargos gradually became more conservative, and by 1925, the couple abandoned their socialist views in favor of “socialized individualism” and even became members of the Republican Party. The Spargos enjoyed many White House visits with Presidents Calvin Coolidge and Herbert Hoover, with Hoover even considering John Spargo for Secretary of Labor during his time in office. Mary Spargo died in 1953. 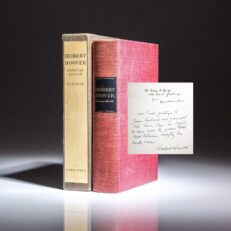