Hunting Big Game In The Eighties

The recipient of this book, James J. Mahoney, was a longtime political aide in Albany, New York, known to the Roosevelt family as “side-kick.” Mahoney served a number of New York governors, including William Sulzer, Martin H. Glynn, Charles S. Whitman, Al Smith, Nathan L. Miller, Franklin D. Roosevelt, Herbert H. Lehman and finally Thomas E. Dewey. Governor Dewey appointed him to his final government position as Secretary to the State Department of Conservation. Upon his retirement in 1946, it was noted, “It is doubted if there is any living man with a greater knowledge not only of state government but also to the trust placed in him by political as well as government leaders since the day, while still a high school student, he became a page in executive offices.” 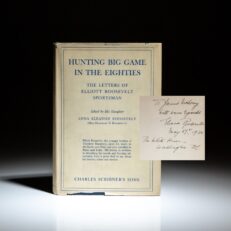