Hunting Trips Of A Ranchman

First edition of Hunting Trips of a Ranchman by Theodore Roosevelt, known as The Medora Edition and limited to 500 copies.

The first edition of Hunting Trips of a Ranchman, known as The Medora Edition, was limited to 500 copies. There were a number of luxury editions offered for sale, including this copy in three quarter levant, which sold for $22.50. An edition in full seal sold for $27.50, full polished levant for $32.00 and olive crushed levant for $75.00. Roosevelt himself contributed $5,000 towards the publication of this work, but sales were not strong, and he did not recoup his investment until many years later. 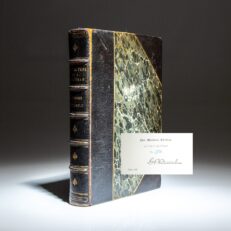