In The Land Of Israel

Octavo, 257pp. Orange hardcover, spine in blue cloth. Stated “first edition” on copyright page. In publishers near fine dust jacket, price on front flap, light wear at edges. From the personal library of Rabbi Stanley Rabinowitz and signed by him on the front free end paper. 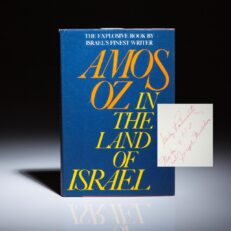