Octavo, 8pp. Housed in blue cloth folio, title on cover in gilt. Speech is printed on 8 separate loose leaf pages and resides in a cloth pocket in the folio. This copy is signed on the last page by President Richard Nixon, dated 2-18-81.” A fine example and a scarce signed copy of President Nixon’s first inaugural address.

Richard Nixon (1913-1994) was sworn in as the 37th President of the United States on January 20th, 1969. The oath of office was administered by Chief Justice Earl Warren. Nixon struck a calming tone in the address, urging Americans “to lower our voices…[for] we cannot learn from one another until we stop shouting at one another.” 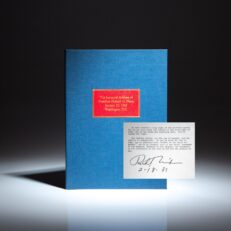