Octavo, 336pp. Black boards, gilt lettering on spine. A first edition, with full number line on the copyright page. In the publisher’s near fine dust jacket, retail price on the front flap. Inscribed by President Richard Nixon on the half-title.

1999: Victory Without War draws on current events and lays out answers to the political questions of the late 1980s. It goes far towards rehabilitating the image of former President Richard Nixon. With his in-depth knowledge of international affairs, it becomes evident that even in retirement, President Nixon did not lose his ability to critically evaluate world events. 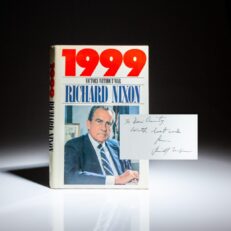