Inaugural Addresses of the Presidents of the United States

Signed limited edition of Inaugural Addresses of the Presidents of the United States: George Washington to George W. Bush, inscribed to Secretary of State Colin Powell.

This signed limited edition, which was distributed to a handful of dignitaries during the George W. Bush administration, was produced by Regnery Publishing of Washington, D.C. According to public records, 250 copies were produced for the White House and not all were signed by President Bush. A handful have appeared on the public market since its release in 2003. Provenance: Potomac Auction House, Lot 1092, Estate of Colin Powell. 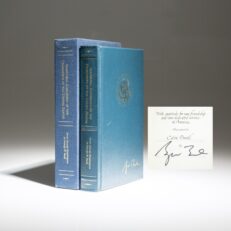 You're viewing: Inaugural Addresses of the Presidents of the United States $5,200.00
Add to cart