Into the heart of Africa: Report on the Courage of the German Scientific Central African Expedition 1907-1908, by Duke Adolf Friedrich of Mecklenburg. Octavo, xi, 476pp. In three quarter brown morocco, title in gilt on spine, raised bands. Marbled endpapers. Inscription on title page, but not able to identify as the authors signature. Hundreds of illustrations and photographs, some in color. Text in German.

Comments: The Duke of Mecklenburg (1873 – 1969) was a German explorer of Africa and colonial politician. He served as the Governor of Togoland from 1912-1914. He was the first president of the National Olympic Committee of West Germany. 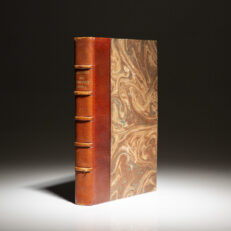