× Ask a Question re: Travels to the Source of the Missouri River and Across the American Continent to the Pacific Ocean
SKU: 645 Categories: American Indians, Early Presidents, Holiday Gifts, Maps & Illustrations, Travel & Exploration, U.S. History

First English edition of Travels to the Source of the Missouri by Meriwether Lewis and William Clark, published in London in 1814.

Quarto, [iii]-xxiv, 663pp, [1pp ads]. Lacking half title and printers notice. Page 323 misprinted as 223. Marbled boards, contemporary half calf spine with gilt title and gilt bands. Chipping and cracking of original spine, front hinge reinforced. General shelf wear to edges of boards. Light foxing to illustrations and maps, mostly clean interior pages. Contains a large engraved foldout map of Lewis and Clark’s Tract across the Western Portion of North America, from the Mississippi to the Pacific Ocean, tipped in before title page. Additional plates, all dated April 28th, 1814, include “Ancient Fortification of the Missouri” and “Great Falls of the Columbia River” opposite pp 45; “Great Falls of the Missouri” opposite pp 193; “Lower Falls of the Columbia” and “Mouth of the Columbia” opposite pp 377. Includes two additional plates from Forty Etchings, From Sketches Made With the Camera Lucinda, In North America, In 1827 and 1828 by Basil Hall. (Sabin 40829) (Howes L-317) (Literature Lewis & Clark 5A.2)

The first English edition is a reprint of the first American edition, printed in Philadelphia in 1814. The original sheets were sent to London, where English publisher, Dr. Thomas Rees, reprinted the American edition for a British audience. The English edition omits the appendix and the “Life of Lewis.” Rees notes that the appendix was omitted because it deals with United States Indian affairs, which are “altogether of a local nature.” The English edition does include a letter written by Thomas Jefferson in 1806 about the voyage and excerpts of a letter written from Lewis to Jefferson in April, 1805. The map is a close copy of the Philadelphia map, but lacks the “Southern Pass” on Henry’s route and has “Lake Riddle” for “Lake Biddle.” (Wheat, 2:59, N.13) 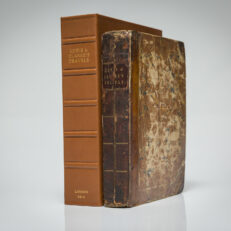 You're viewing: Travels to the Source of the Missouri River and Across the American Continent to the Pacific Ocean $14,500.00
Add to cart