Kings Of The Hill

Signed first edition of Kings of the Hill by Dick and Lynne Cheney, signed by both authors and President Gerald R. Ford on his introduction.

Octavo, xv, 226pp. Blue morocco, title on spine, raised bands. First edition, first printing with no additional publications on copyright page. Marbled endpapers. Previous ownership blind stamp on copyright page. In marbled slipcase, matching blue morocco spine, in fine condition. Possibly a limited edition, but with no limitation page or records from the publisher about a limited edition being produced. More likely a private printing. Signed by Vice President Richard Cheney and his wife Lynne Cheney on the half title, with signature of President Gerald R. Ford on his introduction.

This work, Kings of the Hill, is often compared with Profiles in Courage by John Kennedy. It follows the lives of influential House leaders from Henry Clay to Sam Rayburn. At the time of publication, Dick Cheney was serving in the House of Representatives, representing the state of Wyoming. He had previously served as White House Chief of Staff for President Gerald R. Ford. In 1989, he was called upon by newly elected President George H.W. Bush to serve as Secretary of Defense. In 2001, he was asked to serve as Vice President for George W. Bush. 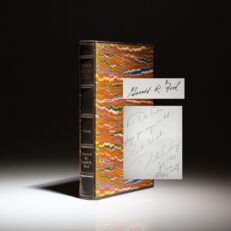