In October of 1911, President Taft embarked on a train trip throughout the western United States to build support for arbitration treaties with England and France. During this trip, he spent three days in South Dakota, where he was greeted with much fanfare. Upon returning to Washington, on October 26th, the Taft Administration filed suit against US Steel for violation of the Sherman Antitrust act. This suit alleges that the Roosevelt administration mistakenly allowed US Steel to purchase the Tennessee Coal and Iron Company. The lawsuit would damage the relationship of President Taft and President Roosevelt, who would launch a 3rd presidential campaign against Taft for the 1912 nomination. 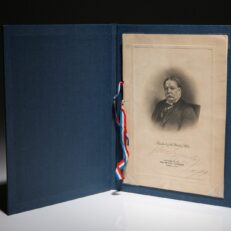