Journey Through My Years

Comments: After leaving politics, Governor James M. Cox concentrated on building a media empire, known today as Cox Communications. In 1953, at the time of this inscription, Wendy Barrie was an actress working for the Crosley Broadcasting Corporation, with distribution in Dayton, Columbus and Cincinnati. Cox recruited Barrie to work for his media empire, but was unsuccessful. James M. Cox was the governor of Ohio from 1913-1915 and again from 1917-1921. He ran for president in 1920, losing to Warren Harding. 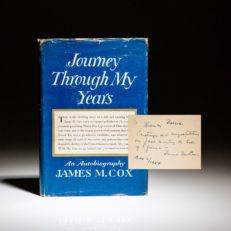 You're viewing: Journey Through My Years $175.00
Add to cart