Comments: One of the most influential politicians from Illinois in the 20th Century, Representative Dan Rostenkowski served on the House Ways and Means committee during the Reagan years. His political career ended abruptly in 1994 when he was indicted on corruption charges relating to the Congressional Post Office Scandal. 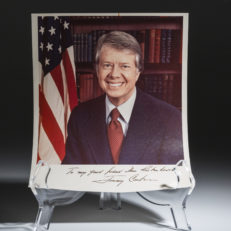