Vera Caspary (1899-1987) was an American author and member of the Communist party under an alias. Laura was Caspary’s best-known work, originally released in a seven-part series in Collier’s magazine from October to November 1942. This copy is a first printing of the fully compiled series and was adapted into a film of the same name in 1944 starring Gene Tierney. 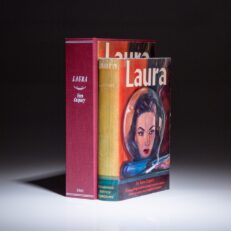