Signed by Charles Francis Adams, two bound pamphlets, Lee’s Centennial: An Address (1907) and An Address at the Opening of the Fenway Building (1899).

Octavo, [8], 76pp; [2 blank], [1]-41pp. Green cloth, title in gilt on spine. Drop of ink at the bottom of the front wrapper of Lee’s Centennial, affecting first six pages. Inscribed by the author on the cover of the pamphlet, bound into this work. 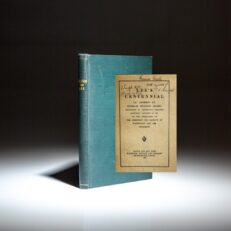