Letter from the United States Ambassador to the United Nations, George H.W. Bush, to the future Senator from New York, Daniel Patrick Moynihan.

Single-page letter, previously folded, on United Nations letterhead. Letter is dated Monday, December 6, [1971]. Full text from Moynihan reads: “George, The President has asked to see me about something or other. I have an appointment for tomorrow at 5:00 P.M. Is there anything you would like me to bring up about your operations? Otherwise I will simply tell him that you seem to be settling in to the splendid misery of it all with accustomed grace and good heart.* Pat M. *Assuming, that is, that I do get by the guards.” George Bush responds in black pen: “Pat – nothing special. Try not to get me fired – He is low on the UN but let’s not let it go down the tube (though the frustrations of the last 3 days are immense). No – I feel I’m getting good cooperation out of the Dept. – especially Sec State – Good luck – My curiosity is piqued. Best – GB.”

When this letter was written, George H.W. Bush was serving as the United States Ambassador to the United Nations, a position he would hold until 1973. Daniel Patrick Moynihan had recently returned to Harvard University but was continuing to act as a domestic advisor to President Richard Nixon. The meeting with President Nixon on Tuesday, December 7, 1971, was a wide-ranging conversation on the civil rights movement, busing policy, the Indo-Pakistani War, and a positive assessment of the performance of George H.W. Bush as U.N. Ambassador. 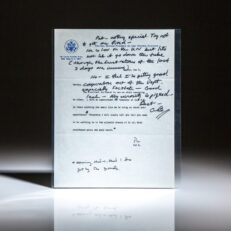