ALS To His Sister

Single-page letter, written on personal stationery as Governor of Georgia, includes mailing envelope. Horizontal folds. Housed in blue cloth folder, mounted on panels with archival corners and mylar covers. This letter is thanking his sister for the gift of a book, noting that in Atlanta they have the opportunity to attend the opera and requesting Gloria to visit them. Provenance: Swann Galleries, New York, 2021.

Gloria Carter Spann (1926-1990) was one of President Jimmy Carter’s sisters, known to the family as Gogo. During the Carter Presidency, she tried to maintain a low profile. She became one of the first women inducted into the Harley Davidson 100,000 Mile Club, and she was named the Most Outstanding Female Motorcyclist of 1978. In 1989 she was diagnosed with pancreatic cancer, like many members of the Carter family. She died in 1990, the last surviving sibling of former President Carter. 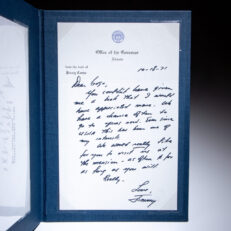