Letter from William Howard Taft, President of the United States

Single page letter, on embossed White House letterhead, bifolium. Includes the original mailing envelope. Previously folded along center line, finger soiling to envelope. Partially typed, with a personalized note from President Taft. Note reads: “I have read what you say in the morning paper, I cannot conceive of any statement from any other source that will so rouse the business community as your favorable and illuminating statements.” An exceptional association copy, written days before Wanamaker was considered for the vice presidential slot on the Republican ticket.

With the untimely death of Vice President James S. Sherman, late into the 1912 presidential campaign, Republicans scrambled to fill the now vacant vice presidential slot on the ticket. A top contender was John Wanamaker of Philadelphia, who was a staunch supporter of President Taft. Wanamaker was a delegate at the contentious Chicago Republican National Convention and a frequent surrogate for the Republican party. The position was ultimately not filled, and President Taft came in third in the election, losing to Woodrow Wilson and former President Theodore Roosevelt. 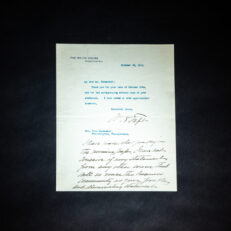 You're viewing: Letter from William Howard Taft, President of the United States $1,800.00
Add to cart