Letter to George Washington regarding his estate

A letter from Mr. Andrew Van Bibber of Baltimore to President George Washington, dated September 20th, 1795, outlining a proposal to exchange land in King William County, Virginia. The letter is addressed to George Washington, Esq, President of the United States. Mount Vernon. Housed in blue cloth folder with title on cover. Letter is secured in archival mylar sleeve. Some crude tape repairs to seams, but no loss of content. In this letter Mr. Van Bibber requesting a bartering and exchange of their landholding estates. He concludes that each would have a lot to gain by exchanging the plots due the proximity of the properties. Mr. Bibber concludes his letter, asking for Washington’s reply and noting that “…I flatter myself you’ll excuse the present liberty and believe me to be with the most respectful regard Sir, Your most obedient, Andrew Van Bibber of Baltimore.”

Comments: In George Washington’s reply to Mr. Van Bibber, dated October 4th, 1795, he notes that “…i am not disposed to give it in exchange for other land equally remote; and of which I have no particular knowledge; but from a general one of the lands in the part of the country you describe yours to be, conceive them to be broken, and of indifferent quality.” This reply to Mr. Bibber was found in the digitized Alfred Berol Collection, having sold at auction in 1953 from the Clendenin J. Ryan collection. 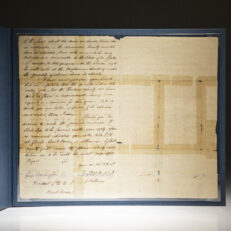 You're viewing: Letter to George Washington regarding his estate $1,800.00
Add to cart