Letter to the Granddaughter of President U.S. Grant

The letter is dated September 2, 1919, on White House stationery. The item is matted, with decorative gilt embellishments, measures 12″ x 22″. The letter is thanking Princess Cantacuzène for a copy of her recent book, Revolutionary Days, published in 1919. In the letter, Wilson speaks fondly of her grandfather, noting that “it is a pleasure to me always to honor the memory of your grandfather.” Wilson closes the letter saying that he continues to have a “deep and abiding interest in everything which affects Russia.” The letter is signed by President Woodrow Wilson.

The book received by the Wilsons was titled Revolutionary Days: Recollections of Romanoffs and Bolsheviki, published in 1919. It details the adventures of Princess Cantacuzène and her husband, during the last days of the Russian autocracy, through the Russian Revolution, and into the Bolshevik regime. The prince and princess escaped to the United States in 1917, where Grant become an author and historian. She was born in the White House in 1876, the daughter of Major General Frederick Dent Grant, the eldest son of President U.S. Grant. She lived to be 99 years old, dying in 1975. Like President Wilson, she was also buried in the National Cathedral in Washington, DC. 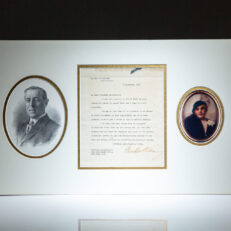 You're viewing: Letter to the Granddaughter of President U.S. Grant $1,500.00
Add to cart