Looking Forward was written by Vice President Bush before he embarked on his successful campaign for president in 1988. Looking Forward covers his career, from a Navy pilot during WWII, through his years as ambassador to China, chairman of the Republican National Committee, director of the CIA and finally to the 1980 presidential race. George Bush would serve as the vice president for Ronald Reagan from 1981-1989 and one term as president from 1989-1993. 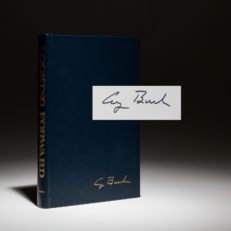 You're viewing: Looking Forward: An Autobiography $1,350.00
Add to cart