Maggie: A Girl of the Streets by Stephen Crane.

Stephen Crane was a prolific American writer during the late 19th century. Most notable for his works in the “realist” tradition, he was an inspiration for writers throughout the 20th century, including Ernest Hemingway. He lived a short life, dying at the age of 28 in 1900. 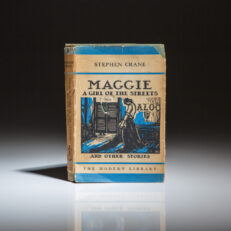