Octavo, 320pp, publisher’s dark blue cloth, title in gilt on spine. Top edge red. Housed in publisher’s slipcase, some toning to spine, soiling to label on side. Signed limited edition of 1000, this being #373, with the signature of Adlai Stevenson on the limitation page.

Comments: Mr. Stevenson was Governor of Illinois from 1949-1953. He was the democratic candidate for President in 1952 and 1956, losing both times to President Dwight Eisenhower. He finished his career as the United States Ambassador to the United Nations under President John Kennedy. 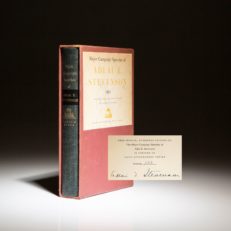