Comments: Kevin McCann met future President Dwight D. Eisenhower in 1946, while he was serving as Army Chief of Staff at the Pentagon. He followed General Eisenhower to Columbia University, then to Paris when Eisenhower was appointed the Supreme Allied Commander. In Paris, McCann served as special assistant to the General, assisting in the preparation of his influential memoirs, Crusade in Europe. McCann was appointed President of Defiance College in 1951, but soon took a leave of absence to follow Eisenhower to the White House as a speech writer. When President Eisenhower retired to Gettysburg, PA, McCann and his wife moved to the Eisenhower farm to serve as Special Assistant to the former president, helping to write his memoirs. According to records from the Eisenhower Library, there were 32 limited edition copies of Crusade In Europe, bound in red morocco, delivered to world leaders and influential supporters in 1948. People on this list included Winston Churchill, George C. Marshall, Omar Bradley and Kevin McCann. 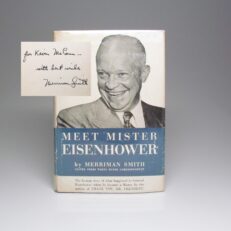