Signed limited edition of the Memoirs of Harry S. Truman, inscribed in both volumes to National Security Advisor Gordon Gray.

Thick octavo, [two volumes], xi, [1], 596pp; xi, [3], 594pp. Blue cloth, title in gilt on spine over black label. Top edge gilt. Both volumes appear unread. In publisher’s original glassine jackets, both fine. Gray endpapers. Housed in limited edition slipcases, both inscribed by Harry Truman on the title label, with some shelf wear, but overall near fine. Both volumes are inscribed on the half title: “To the Honorable Gordon Gray with kindest regards and with great appreciation of his friendship + service to the nation. Harry Truman. Independence. Jan. 6, 1956.” Inscription in Volume II: “To Hon. Gordon Gray from Harry Truman. 5/5/56.”

This limited edition set is inscribed to National Security Advisor Gordon Gray, who served with every president from Harry S. Truman through Gerald R. Ford. Gray served as the Secretary of the Army under President Truman. Under President Eisenhower, Gray served as the head of the Office of Defense Mobilization and later as National Security Advisor. He was awarded the Presidential Medal of Freedom in 1961 shortly before Eisenhower left office. From 1961-1976 he served on the President’s Foreign Intelligence Advisory Board. Gordon Gray passed away in 1982.

This limited edition set of the Memoirs of Harry S. Truman is limited to 500 unnumbered copies. They were originally meant to be released to the public as a signed limited edition set for $35.00, but President Truman had no desire to profit off his signature. In a letter to Ken McCormick of Doubleday, dated July 1, 1955, Truman comments that “I cannot possibly enter into a program which would look as if I were selling autographs instead of a book. I want the book sold on its merit.” Doubleday sent President Truman 500 copies of the deluxe set, which he inscribed to dignitaries over the years. Not all of the 500 were distributed by the president, with a few remaining unsigned copies being sold at the Truman Library. 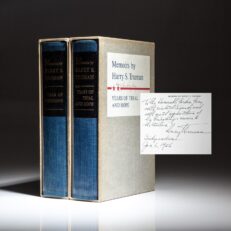