This work by Karen Blixen was published the same year as the First American Edition and includes the following acclaimed stories: The Deluge At Norderney, The Road Round Pisa, The Old Chevalier, The Monkey, The Supper At Elisnore, The Dreamers, and The Poet. 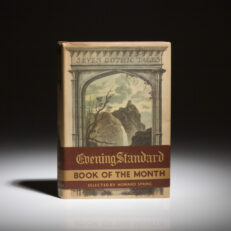