Limited edition of the Memoirs of Harry Truman, in slipcases, inscribed to American historian and author, Thomas Fleming.

Thick octavo, [in two volumes], xi, 596pp; xi, 594pp. Blue leather, title in gilt on spine of each volume. Top edge gilt. Each volume in a publisher’s cardboard slipcase, title on label affixed to side. This leather-bound set was produced for the personal use of President Harry Truman when he maintained an office at the Truman Presidential Library. Only a handful of signed sets are known to exist, all given to close associates and family members of President Truman. The remaining volumes were eventually sold by the library as unsigned sets. (Burns 0016) Inscribed in Volume I: “To Tom Fleming, With kindest regards and appreciation of his friends, Harry S. Truman.” Additional inscription in Volume II: “To Tom Fleming, Best of luck and a happy life. Harry S. Truman.”

Thomas Fleming (1927-2017) was a well-known historian and author in 1970 when he was selected to assist Margaret Truman in writing and researching her biography of her father, President Harry Truman. Over a period of 8 days in 1970, Fleming and Margaret Truman sat with President Truman in his library in Independence, Missouri, going over the intimate details of his life. It was an informal affair but provided the background needed to write the biography. The biography, simply titled Harry S. Truman, would go on to become a national bestseller in 1972. Fleming would assist Margaret Truman in her research for subsequent books, including Women of Courage (1976) , Bess W. Truman (1986) and First Ladies (1995). 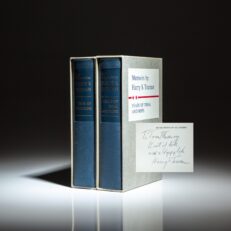