Memoirs by Harry S. Truman – Year of Decisions; Years of Trial and Hope

Signed limited edition of the Memoirs of Harry S. Truman, inscribed in both volumes to Senator Wayne Morse. Thick octavo, [two volumes], xi, [1], 596pp; xi, [3], 594pp. Blue cloth, title in gilt on spine over black label. Top edge gilt. Both volumes appear unread. In publisher’s original glassine jackets, fine condition. Gray endpapers. Housed in limited edition slipcases, both inscribed by Harry Truman on the title label, with some shelf wear, but overall near fine. Both volumes are inscribed on the half title: “To the Honorable Wayne Morse, with affectionate regards from one of his greatest admirers. Harry Truman. Independence. Dec. 31, 1955.” Inscription in Volume II: “To Honorable Wayne Morse from Harry Truman. 5/5/56.” Includes a note on Page 501 of Volume II from “MMM,” the wife of Senator Morse, Mildred Martha “Midge” Morse. She writes that the following paragraph by Truman “states very well the feelings that Wayne Morse had that lead him to leave the campaign and support Stevenson. He had become disenchanted when Eisenhower chose Richard Nixon. As the campaign went on he become convinced that Stevenson should be elected.”

Comments: This limited edition set is inscribed to Senator Wayne Morse, an Oregon politician and attorney. He began his career as a Democrat, but after the election of President Dwight D. Eisenhower, he became an independent, often caucusing with the Democrats. He ran for the democratic nomination for president in 1960, but lost to John F. Kennedy. He was a vocal opponent of the Vietnam War, one of two Senators who opposed the Gulf of Tonkin Resolution. He lost reelection in 1968. This limited edition set of the Memoirs of Harry S. Truman is limited to 500 unnumbered copies. They were originally meant to be released to the public as a signed limited edition set for $35.00, but President Truman had no desire to profit off of his signature. In a letter to Ken McCormack of Doubleday, dated July 1, 1955, Truman comments that “I cannot possibly enter into a program would look as if I were selling autographs instead of a book. I want the book sold on its merit.” Doubleday sent President Truman 500 copies of the deluxe set, which he inscribed to dignitaries over the years. Not all of the 500 were distributed by the president, with a few remaining unsigned copies being sold at the Truman Library. 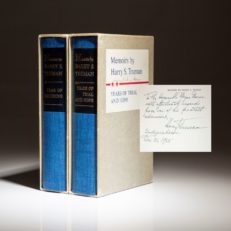