Octavo, (two volumes), 596pp (Vol.1), 594pp (Vol.2). Bound in 3/4 blue levant morocco over marbled boards, raised bands, title in gilt on spine, stated “Limited First Edition” in gilt at bottom of spine. These books were rebound from the “Special Kansas City Edition,” as noted on the copyright page of both volumes. Light wear to edges, some separation at the spine of Volume I, but text block is solid. Contains tipped-in facsimile letter from Vice President Truman to Hugh P. Williamson of Fulton, Missouri. (Burns 0016)Books were specially bound by Max Adjarian, the former bookbinder of the National Library, Paris, France. This is a limited edition set of 75 copies, this being number 65 of 75.

The Memoirs of Harry Truman were first published in limited quantities as the “Kansas City Edition” and a small number of specially bound presentation editions. 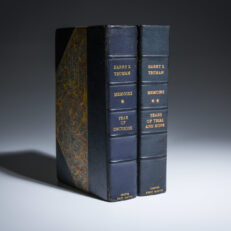