Memoirs of a Veteran

First edition of Memoirs of a Veteran by Confederate Captain Isaac Hermann, inscribed by his son, Isadore Hermann.

Octavo, 285pp. Gray cloth, title in gilt on spine. Light soiling to spine, spotting to both covers. Frontispiece portrait of the author and six full-page illustrations. Solid text block, hinges showing some wear, but stable. (Howes H436) (Nevins I: 103) (Dornbusch II: 239). Inscribed on the front pastedown endpaper by the son of Captain Hermann: “To Alfred_, Compliments of Isadore Hermann.”

Captain Isaac Hermann (1838-1917), author of Memoirs of a Veteran, has been described as a “champion storyteller, whatever his faults as a soldier.” Hermann joined the Washington Rifles from Sandersville, Georgia in 1861 and saw action in western Virginia, Tennessee, Mississippi and Georgia. He was released from combat duty due to fevers and old injuries but continued to serve in hospitals until 1865. In Memoirs of a Veteran, Hermann tells stories of being penniless in Richmond, chasing cannonballs during a battle and being arrested as a deserter in Macon while visiting a cousin. 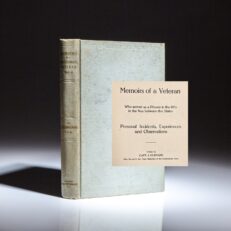