Minutes Of The Council Of Appointment Of New York – April 4, 1778 – May 3, 1779. From Original Manuscript In Possession of Franklin D. Roosevelt. With Introduction by Dorothy C. Barck.

Minutes Of The Council of Appointment of New York, a scarce signed limited edition from President Franklin D. Roosevelt. Octavo, 97pp. Gray paper covered boards, cloth spine. Title on label affixed to front cover. Originally published with brown paper dust jacket, with limitation in pencil on cover, still included but separated at seams. Housed in custom clamshell case, marbled boards. In 1923, Mr. Roosevelt purchased the 148 Page manuscript of the minutes of the New York Council of Appointments. In 1925, at Roosevelt’s urging, the New York Historical Society published sections of these minutes. They simultaneously agreed to produce 50 copies of this limited edition collection of the historical documents. (Horowitz, 22) This copy is hand numbered by Franklin D. Roosevelt on the colophon page, noting: “50 Copies Printed for me, January, 1925. No. 25. Franklin D. Roosevelt.” Additional inscription by President Roosevelt on the front free end paper: “For Fred B. Adams, Jr. from Franklin D. Roosevelt. A ‘thriller’ of years ago.” In pencil on the front end paper notes that the “Thriller” was an accusation of “fifth-column” activity, found on PP 63-68, 71-72. An exceptionally scarce limited edition from future President Franklin D. Roosevelt.

Comments: Of the 50 copies produced in 1925, only 15 of them were distributed to members of the New York Historical Society and Roosevelt family members. In 1943, Margaret Suckley found the remaining 35 in storage and researched who had received copies in 1925. This copy, being number 25 of 50, is one of the “Suckley” copies, gifted to Frederick B. Adams sometime after 1943. 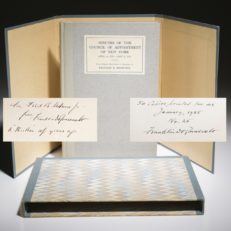