Quarto, [6], 253pp, [3]. Blue leather, title in gilt on spine. Top edge gilt. Light rubbing to top edges of spine. Light gray endpapers. Blindstamp on last page from previous owner. Housed in custom blue leather clamshell case, title on spine in gilt. Frontispiece portrait, signed by the author. This is from a limited edition of 250 copies, signed by President Harry Truman shortly before leaving the White House. This is number 131 of 250: “To: Hon. Mon C. Wallgreen, From: The President. White House, August 13, 1952.” Additional inscription below frontispiece portrait: “To my good friend + able colleague, with every good wish. Harry Truman.”

By the time Governor Mon Wallgren received this book in 1952 he had retired from public service but remained a close friend of President Truman. During his long public career, he served as the 13th Governor of Washington (1945-1949), a United States Senator and New Deal Democrat in the House of Representatives. He lost reelection as Governor of Washington in 1948, but was appointed to the Federal Power Commission, serving as its Chairman from 1950-1951. He died in a car accident in 1961. 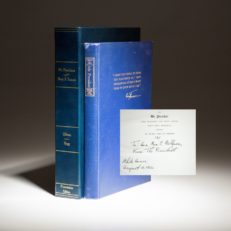